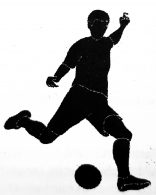 The final whistle blows and it’s into extra time!

Well it’s not since schooldays has anyone seen me in football kit and playing in a team game, but it seemed a good analogy to use as I pen these thoughts.

This particular game kicked off thirty six years ago when on a typically wet April day we arrived in Blackburn and took to the field and now with just seconds to go I listen for the whistle and after a short break the game will resume in extras time, but with some different rules!

Sixty five years old has been the State retirement age for men in one form or another for nearly ninety years and still today many aspire to working to that day and not beyond.  Having said that some 1.5 million men and women are at present working beyond retirement age in the U.K. and in a few days time I’ll be another to add to the number!

I didn’t know when we accepted the invitation of the then Management Committee to be part of God’s work here in Blackburn that it would lead me to this memorable point, but it has.

I look back and it seems like one long glorious sunny day.  It’s not always been easy, but it’s been a joy and a privilege to have the honour of leading and serving a wonderful loving community of believers and those seeking to understand the Gospel message as we tried to deliver it by word and action to all ages in various ways through many a year.

Often changes are made in churches when ministers move on and are replaced.  When the same one stays on then changed have to occur within that ministry and that has been our story and the most major ones all involve the number twelve.

Twelve years on from my first kick of the ball and while still not at half time, we joined the United Reformed Church and within weeks I also had pastoral charge of the now former Witton Church and a new member of friends were made as we bean to share with that small congregation,  After they closed five years later all either joined with us or Woodlands.

Then a further twelve years on from that first encounter with another “team” (and by now we are in the second half of the game) it’s off to “Captain” Woodlands and together share much with yet more wonderful Christian folk and broaden our programme to undertake much in unison.  Woodlands were especially accommodating when the old BRS building was vacated in order for Kingsway to be built and friendships sealed then continue to this day.

Now a further twelve years has passed and as the game goes into extra time we have another major change to embrace.

On 20th May the new Synod Missional Partnerships will be launched.  The pastorate as we know it will be dissolved and all our individual churches in Lancarshire will be in a M.O.  We are Lancarshire East Partnership which is comprised of fourteen churches in the eastern part of the county: Accrington: Michelle Jarmany.  Blackburn: Revidge Fold, Trinity Brownhill, Westbury Gardens – Lena Talbot and Mal Breeze.  Ragged School (Kingsway), Woodlands – Alan Barnes.  Burnley & Nelson: Liz Jewitt.  Clitheroe & Read: Michelle Jarmany.  Darween: Bolton Road, Cental, Tockholes, Trinity Lower Darween UM – Catherine Lewis-Smith.  Great Harwood: Trinity UM: Geoffrey Hayes (Methodist).  Much more about this and the implications and how it impacts on local congregations will be published next month.

Thus to end this chapter of ministry and for me to continue life also to be known as a Senior citizen we will have a party!

Well a buffet luncheon anyway.  You are ALL invited to Kingsway on SUNDAY 22nd APRIL for a 12.15 start (that should allow time for Woodlands folk to make their way after worship there)

I want to take this opportunity to say a big THANK YOU to those of you who now make up the membership of this pastorate and it seemed an appropriate time to do so with both the birthday and ministerial changes happening at the same time.

As always there is a famous form to be found for you to sign if you are coming so that we cater for the right number, or phone me please.  I don’t want the last person in the queue getting the final sausage roll, nor do I want to be eating the left over’s for a week  -thus the importance of the list.

Finally, ABSOLUTELY NO PRESENTS , GIFTS, DONATIONS – just bring yourselves and hopefully a pleasant time together.